Tuesday 14th April 2020 Paolo's 16th album will be released on the Zina Zinetti Music label. On this album Paolo Russo revisits his musical roots through the beautiful works of Scarlatti, Zipoli, Galuppi, Pampani, Legati and Croce. All wonderful composers from the Baroque era writing for clavicembalo - on the album interpreted and played on piano with the unique artistic expression of Russo, which gives new life to the timeless compositions.

The album is dedicated to the memory of Rachele Marchegiani ("La Signora"), Paolo's old piano teacher

The album will be available on numerous digital platforms, but we encourage purchasing on Bandcamp via this link:

Read more about the album here: 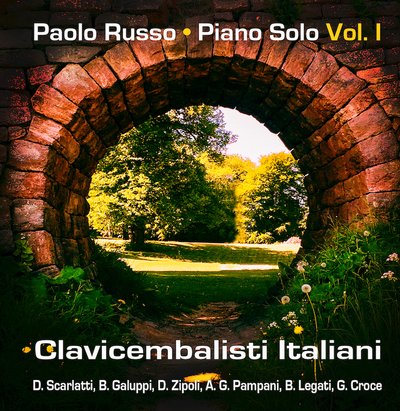 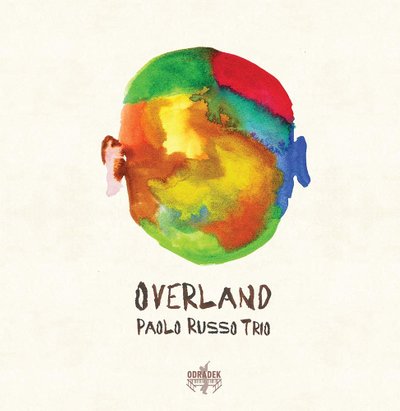 In the Summer of 2020 you have the possiblity to experience Paolo's Jazz Trio live playing primarily music from Paolo's album "Overland"  released in May 2019. The concerts are in Denmark, but the concert 24th June will also be streamed live. See the list of live concerts here.

If you want to purchase the album follow one of the links below. The music on the album is composed and arranged by Paolo and reflects the outer and inner journey with beautiful melodies and virtuos playing.

"Overland represents for me a sort of manifesto, a way of exploring the world focusing on the calm, slow and reflective rhythm, leaving space for research, observation, contemplation and deepening..."

- recording with Chamber Orchestra in Serbia

In November 2019 Paolo went to Novi Sad, Serbia to record his first concerto for Bandoneon and Chamber Orchestra . Click here or on the picture below to see a 3-min. promo-video, where you get an idea of the atmosphere and intensity of the concerto. A vibrant, strong and authentic expression of Paolo's musical vision and ongoing dedication to creating new original music for bandoneon.

Follow Paolo on social media or sign up for his newsletter to recieve updates on the project.

"My deepest appreciation goes to all those who have participated in this project, starting from the beautiful musicians of the Zrenjaninski Kamerni Orkestar, the entire audio recording crew at Studio M and the video recording crew, led by Srecko Milosavljevic. Very special thanks to the conductor, Thommy Andersson, to the executive producer, Lelo Nika, to the orchestra manager, Roman Bugar and to the assistant Katrine Krog Russo." 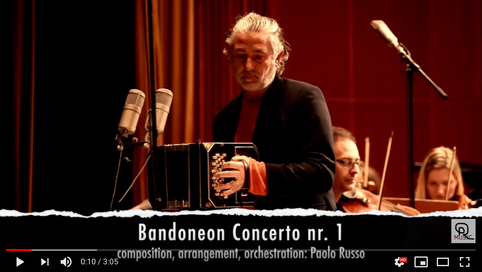 LISTEN TO THE MUSIC

Click on the pictures below or visit Paolo's Bandcamp website to stream the music from his solo bandoneon album "Songs from the Forest", released in December 2018 and the wonderful "Fellini Goes Jazz", an album dedicated to the music of the great Nino Rota. You can purchase Paolo's music directly from Bandcamp or iTunes - or by contacting us directly at info@paolorusso.com. Please go to the Media and shop page to learn more.

On this solo piano album, Paolo Russo revisits his musical roots through the beautiful works of Scarlatti, Zipoli, Galuppi, Pampani, Legati and Croce. All wonderful composers from the Baroque era writing for clavicembalo - on the album interpreted and played on piano with the unique artistic expression of Russo, which gives new life to the timeless compositions.

The album is dedicated to the memory of Rachele Marchegiani ("La Signora"), Paolo's old piano teacher

Songs from the Forest

This is the third release in the series of solo bandoneon albums from Paolo Russo. The first album contained jazz standards (2016); the second album (2017) featured newly composed music (including the bandoneon sheet music)

The inspiration from the forest can be perceived throughout the whole album, where Paolo's atmospheric melodies and free improvisations remind the listener of the power and eternal force of nature.

Paolo Russo takes the listener on a journey through some of the most famous themes from Fellini's masterpieces, "Amarcord", "La Dolce Vita" and "8 e 1/2", as well as a selection of melodies from the unforgettable soundtrack of "The Godfather".

This outstanding music material is re-interpreted, re-arranged and presented by Paolo Russo and his quintet in two suites, the "Fellini Suite" and the "Godfather Suite", recorded live during the 2013 Copenhagen Jazz Festival at Jazzhus Montmartre.

Here you can watch more than 100 videos spanning from Paolo playing with symphony orchestra, classical trio, jazz duo - quintet, and not least his solo videos showing his technique and groundbreaking works on the bandoneon. From the intimacy of his studio to some of the most prestigious stages in the world.